Intro to weaving: The basic technique

Weaving is a repetitive and meditative craft. The basic technique is simple, but holds so much potential for endless variation and experimentation. In this short guide, we will show you how to get started with weaving and how to transform the basic pattern into a modern and minimalistic grid texture with just one small adjustment.

Our last post is a step-by-step tutorial on how to make your own basic weaving loom from a secondhand wooden frame. To get ready for weaving, follow our tutorial (here) or use a ready-made loom, that you can find for example on Etsy.

We will go over the last few steps of the loom set-up again here. After warping the loom, a wooden stick or dowel is inserted. To do this, simply thread the stick over the first string, under the next, then over - under - over -under, and so on until you reach the end of the warp. The over-under-over-under motion is exactly what we will do when we are weaving later, so the stick will help us with that.

The last thing to do before we start weaving, is to insert a strip of cardboard or wood at the bottom of the frame, so that the weaving does not slip down the frame and get uneven. This piece forms a nice edge to press against later.

On the right of the image you see also some tools we will need. One or more blunt large tapestry needles, scissors and a comb. (This one lost a few teeth already from pushing down on the weaving with a lot of force. So make sure to use an old comb or one you are ok with potentially damaging. Alternatively you can also use a fork). Instead of the needles, you can also use a weaving shuttle (the wooden piece on the right side of the frame). For this purpose, I will stick with the needles though, as the shuttle can get a bit bulky sometimes and is also less accessible for many people.

Now it's finally time to start. First, cut a piece of your yarn, that is approximately five to ten lenghts of your frame long. Longer than that it will get difficult and tedious to pull the yarn through the frame. Thread the yarn through your needle and start on one side of the loom. Thread your needle under the first, over the second, under the third, over the fourth and keep going in the same under-over-under-over pattern to the end of the frame.

Once at the end, pull the yarn through. Make sure to leave it very loose at the edge of the warp, where you started and make a kind of arch, like on the picture above. Since the yarn has to go over and under the warp strings, you need slightly more than just the width of the warp and to make sure that the sides are not pulled in too tight, we use this arch.

To finish the basic pattern, we simply go back the other direction, doing the same over and under, but this time the opposite way. Where you went over on the previous row, you now go under and where you went under before, you go over. Depending on how you started, one of these directions, you can follow the gap you made with the wooden stick earlier. It acts as a speration between the warp and has basically pre-threaded the pattern for you. Simply guide the needle through the gap quite close to the stick.

You can see on the image above, how that looks like when the rows are not pressed down (this is just done for showing it, in the normal process, you always press down each row after completing it!). Below, in the pressed down rows, you can see, how the horizontal yarn (also called the weft) is interlocking and therefore making a stable fabric - or the very start of it.

When you get to the end of the second row, pull the yarn, make sure not to do it too tight, make your arch and press the yarn down with your comb. Continue repeating row 1 and 2 until you reach the end of your loom, for a very basic, one-colour pattern.

Step it up: A grid variation

Once you got the hang of the basic pattern, by weaving ten or so rows at the start of your frame, you can think about changing it up a bit. The ten basic rows, should always be done at the start and end of any weaving, to give it a nice base and edge, and in case you plan on sewing your finished woven piece into for example a basket later, you can use this as your seam allowance.

One extremely simple way to completely change the look and texture of the woven fabric, without changing the pattern at all, is to play with the thickness of the yarn. In this case, we will use the bulky yarn to go in one direction, following the gap of the stick (this makes weaving and pulling extra bulky yarn a lot easier!) and the thin yarn to go the opposite direction. Basically, we switch the yarns every other row, while always doing the same pattern of over-under. The bulky yarn will always do over-under-over and the thin yarn always under-over-under.

It is a bit hard to see in this image, how the bulky and thin yarn are going the opposite way over and under, but that is kind of the point. The most clear grid pattern forms, whenever you use the same kind of yarn as the thin yarn as you had used previously to warp your frame.

Once you have woven a few rows, the grid pattern starts to form. In this case I have used a single strand of the bulky yarn for each row, but you could also use a longer piece and turn the corners. Single strands are easier to deal with, when you want to later sew the edges together, for example to make a cylinder shape for a basket, as they are less bulky. However, if you want to make a rug or wall hanging with this, you should turn the corners, as it makes the fabric much more stable at the edge.

Where to go from here?

Once you got the basics down, there is really no end. There is thousands of different patterns to experiment with, different colours, yarn weights and so on. Now we have just done a simple over-under on each alternating warp string, but you could do two at a time or three over, one under. When you offset these larger patterns you get chevrons and diagonal stripes. Really, the possibilities are endless and I encourage you to just try out things, experiment and enjoy the process. If something goes wrong, you can always take out the needle and pull the yarn back out.

In all of this, there is one important thing. Whatever pattern you make, at some point the warp and weft, so the vertical and horizontal yarns have to interlock. If you would do the same pattern of over-under-over and then again over-under-over in each row, there would always be the same warp string in the front and the same in the back. Once you take the fabric off the loom, the two sides would simply seperate. So to create a stable fabric, you have to do the opposite over/under around a warp string at least a few times for each pair of rows. The less times, the less stable. Of course for wall handings, it doesn't matter so much how stable the fabric is, as it is never used or not touched very often, but for functional items, like rugs, pillows or baskets, it is super important to have some integrity to the fabric.

If you want to learn some more techniques or see the whole process step by step in video, I highly recommend this tutorial by With Wendy on Youtube - which is how I got started with weaving in the first place.

If you are looking for some inspiration for weaving projects, patterns and techniques, visit our pinterest board called "Weaving" with a collection of handwoven wall hangings, rugs, pillows and more.

This is how I continued the rest of the weaving from this tutorial. The white parts are some fabric strips, ironed so that all the raw edges are folded inside to give a cleaner look. In a future tutorial, we will show you how to take your weaving off the loom and how to prepare it for sewing or finish it to display on the wall.

Until then: happy weaving! 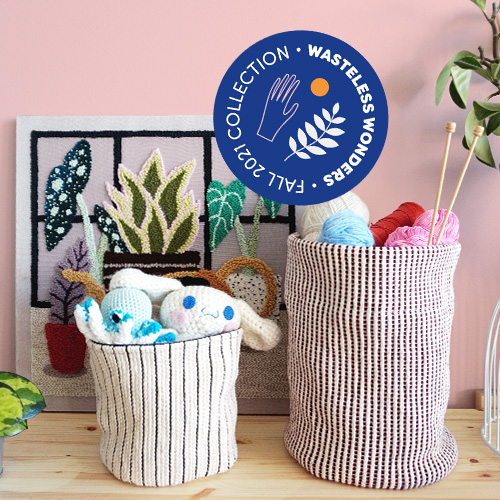 Warm colors and soft shapes for a cozy home 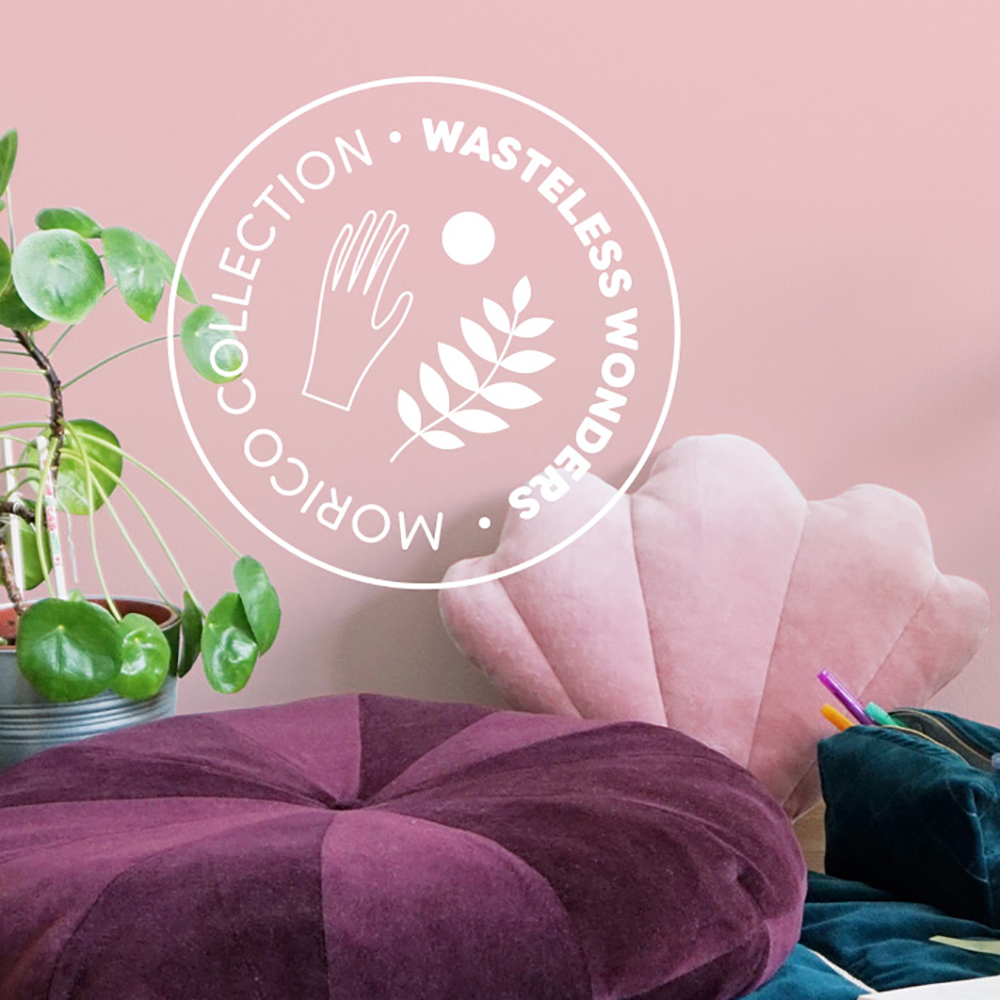 If you want the newest tutorials, stories, updates and occasional wonders in your inbox every week, sign up to our e-mail newsletter below!
Thank you for subscribing to our newsletter.
Oops! Something went wrong while submitting the form.